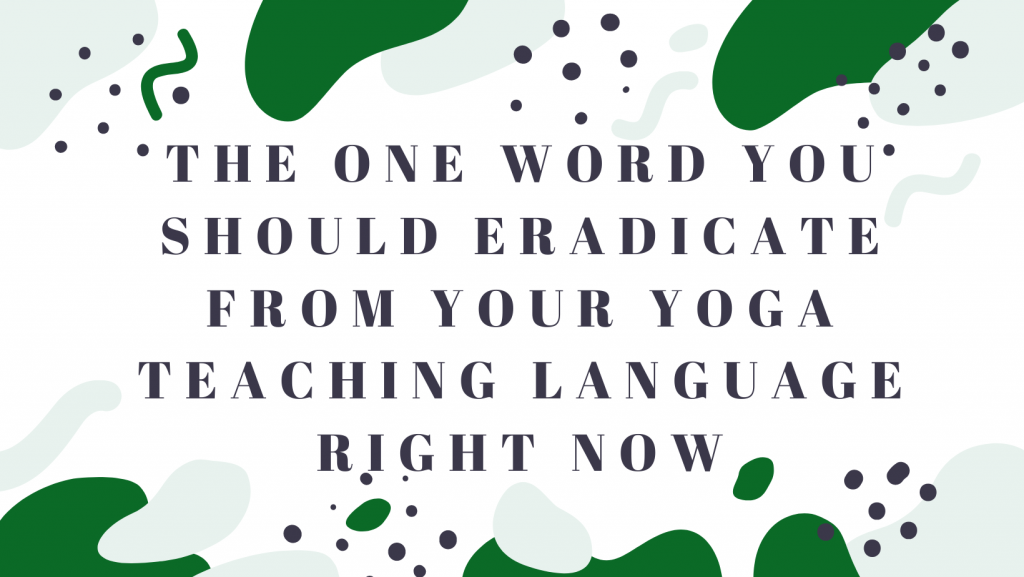 One of the greatest improvements to my own yoga teaching practice has been through observing other yoga teachers teach. As a teacher trainer, this is a fairly large part of my job and I get to see a lot of smart, creative, and accessible sequencing and asana variations… of course, sometimes I come across some not so great asana choices. However, it’s less common for me to disagree with something I see, and more common I disagree with something I hear.

When observing a class, it’s not just the teacher I get a window on to — but how students respond to the teaching. How joyful, inclusive (or otherwise) a student finds a class doesn’t just come down to the asana and sequencing. A large part of their experience is formed by the teacher’s quality of instructions and language choices.

On Nourish’s 200-hour and 300-hour teacher trainings we spend time considering the language of teaching. As a lead trainer, it is my responsibility to ensure I am teaching my students how to teach effectively, authentically, and inclusively (and modelling that in my own teaching!). Understanding the embodied dynamics of asana is key for this, but for those who plan to teach, communicating this understanding is integral.

There’s a lot of reasons why words matter for yoga teachers. At their worst, word choices can make students feel excluded and bad about their practice and abilities. At best, they enable students to take up space in their own practice and experience yoga with joy and without discrimination.

Yoga teachers, particularly those who haven’t been teaching very long, get hung up on sequencing and what poses to teach. But the reality is it matters a lot less how creative, how many variations, or intelligent the sequencing is if you can’t communicate it well.

An early trapping of teaching yoga is the unconscious belief that your greatest asset is how you physically demonstrate or present your own practice. However, as with most pedagogical disciplines, language is your foundational and most influential teaching tool. When teaching yoga, demonstrating is a secondary support, and physical adjustments are your final port of call. Clear, invitational, welcoming instructions come first.

Not considering how you are going to communicate the sequence can make your classes and teaching:

There is one four-letter word that shows up time and time again in classes. A word that is unconsciously used by the teacher but can have a negative impact on the student. It is used as an unnecessary filler word skewing clarity, can be triggering, make students question their bodies and yoga abilities, and above all is ableist.

Ableism is the discrimination against people who have disabilities. However, like all forms of discrimination, it often manifests itself as micro-aggressions, unconsciously internalised beliefs, or plain old carelessness, usually through behaviours and often language.

The Surprising Way Ableist Language Shows Up in Yoga Classes

The one word that shows up frequently, seemingly innocuously, and by the most well-intentioned teachers is…

Before I go on to explain the profound limitations and injustices embedded in this word, take a moment to reflect on those phrases and even jot down any ideas on why the word ‘just’ is prohibitive and ableist, particularly in a yoga context.

It’s okay if nothing comes to mind, and perhaps a good way to start is putting your personal relationship to and perspective on the word aside. Consider instructions prefaced with ‘just’ from a student’s standpoint, particularly a student new to yoga, an older person, or a person with disabilities.

The word ‘just’ is an assumption. ‘Just’ implies that the movement, pose, or length of time in a pose, is simple and available to everyone. So if it’s not available for a student or is challenging for them, it reads as a failure and makes yoga prohibitive.

That’s a lot of range for such a small word. So when the word ‘just’ is used it is often superfluous and almost always open to interpretation. However, in the context of a yoga class, it makes most linguistic sense as ‘simply’ (trust me, it’s not used as a weakly invitational ‘perhaps’).

As an adverb, ‘just’ modifies the verb, so when we say ‘just holding for X breaths’ or ‘just putting your hand/foot/leg here’, we are saying ‘simply holding’, or ‘simply putting’.

The words ‘inclusive’, ‘accessible’, and ‘yoga is for everybody’ have become commonplace yoga branding. So a good litmus test for how true this is is by evaluating the language used in yoga classes. Although actions may speak louder than words, words hold a tremendous amount of power. How ideas, such as healing, are expressed and navigated in the yoga space have enormous potential for affecting how a student perceives themself.

Teachers often don’t mean to undermine their students’ abilities when they use the word ‘just’. ‘Just’ is a common verbal tic and filler word, similar to ‘like’, ‘actually’, ‘kind of’, ‘I mean’.

However, all of these words, including ‘just’, also undermine your position as a teacher. Many yoga teachers struggle with the concept that, in the class space, they are in a position of power. Either they feel like an imposter, or they fear that they will unintentionally abuse their position.

‘Just’ is often used as a word to minimise the speaker’s authority — the classic example is ‘just following up’, as opposed to ‘following up on’ which is perceived to be more direct and authoritative, and therefore rude. Teachers, therefore, use ‘just’ (often subconsciously) to minimise their position, and implies uncertainty or lack of confidence in your instructions. An uncertainty that is unfairly undermining your abilities to believe in your capacities as a teacher — and therefore give your students the class they deserve. 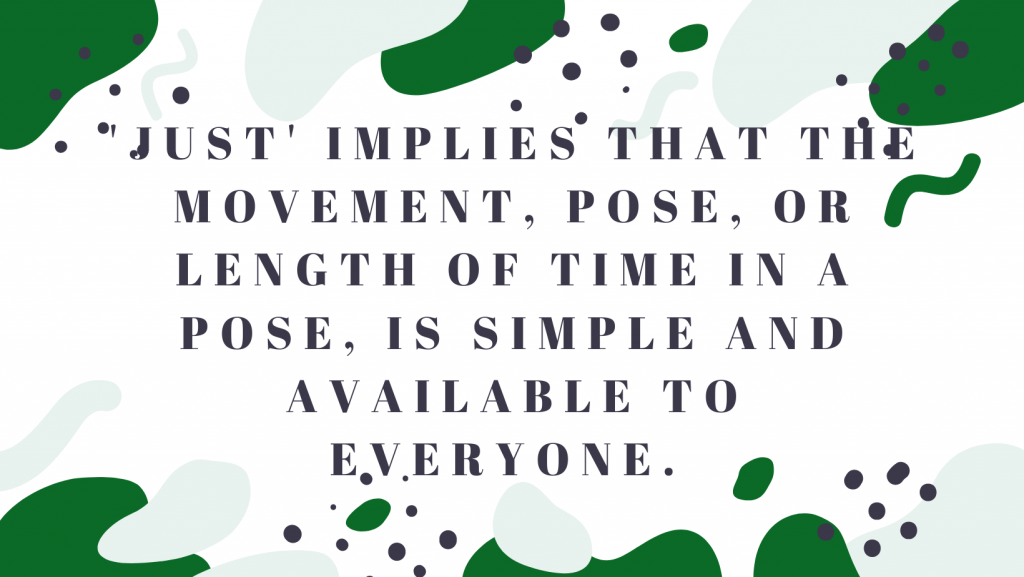 Although being aware and versed in variations for various yoga practices, such as plank pose or three-part pranayama, are essential to make your classes inclusive, how you communicate as a teacher is fundamental in forming your students’ overall experience. If you feel like your verbal teaching practice could be fine-tuned spend some time reflecting on:

A common concern when it comes to offering variations is the amount of detail needed and the fear of being too wordy. Below are some examples of clear, invitational instructions that encourage students to explore different variations:

One of the reasons I believe in and developed a mentorship program is that yoga, particularly as a teacher, is a space of continual growth and development. Unravelling and rebuilding our personal habits, or the failures of the broader tradition, is something we can offer not only ourselves, but is what our students deserve. When it comes to language we have the capacity to make or break a student’s relationship to yoga and all it offers.